Ichthyologists call the tail fin of fishes the caudal fin. A few years ago I noticed some interesting things about the color of the caudal fin in the surfperch I encountered on the outer shores. These observations invigorated my interest in surfperch ecology and evolution and they still help shape my thinking whenever I’m out on the sandy beaches. In the northern part of the range, we encounter three common surfperch in sandy beach habitats. If you didn’t have any other information, you could tell them apart solely on the basis of the color of the caudal fin, or could you?

I happened to catch the female redtails above (see Let’s Check Out Another Surfperch), on a single cast one morning in September 2011.  They all demonstrate the hallmark red tail to which both their common and the scientific names refer. You can count on the red tail of the redtail surfperch.

On the other end of the surfperch caudal fin color spectrum is the walleye, Hyperprosopon argenteum (see Explore the Surf Zone), noted much more for its proportionally large eye (see Eyeball to Eyeball) than for the color of its tail fin, which always dark gray.

Somewhere in the middle resides a close relative of the walleye, the silver surfperch, Hyperprosopon ellipticum (see Meet the Silver Surfperch). Milt Love, in my favorite book about fishes of the Pacific coast, Probably More Than You Want to Know About the Fishes of the Pacific Coast, says the tail is usually pinkish. That’s true, kind of. Most of the silver surf perch we see do have a pinkish tail. But the fish we see up close from our shore- bound positions are fairly stressed from their capture. What I have found is that unstressed silvers have the clear caudal with a black trailing margin, just like you see in the image above.

When I first discovered this with my friend Mike, it made us wonder about what was known about relationships between Amphistichus and Hyperprosopon. Was the red caudal fin seen in each genus inherited from a common ancestor or did it arise independently? Nobody had ever mapped caudal fin color on a surfperch phylogeny, so we teamed up with researchers at Kansas State University and Oregon State University to explore relationships in these and other species within the two genera and tackle a few other evolutionary questions. You can read the paper that came out of that work here. 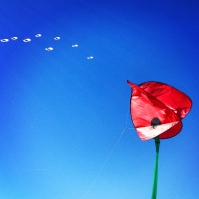