Below are examples of bivalves you are likely to run across if you spend any time at all on Oregon’s exposed shores. At the bottom of the page I list some of my favorite field guides and identification resources that should help if you want to take things a little farther. My organization follows Lamb an Hanby (2005). Common names are my choice. I refer toWoRMS for scientific names, and I learn a ton by browsing the natural history riches in Kozloff (1993). All photos are from northern Oregon unless otherwise noted in the caption. Some of the examples below, like California mussels, Mytylus californianus, live on intertidal rocks. Some, like Pacific razor clams, Siliqua patula are abundant in intertidal sands. Several other examples don’t live on the exposed coast at all, but we see them there because they wash up on beaches after living out their lives in sister ecosystems. Gaper clams, Tresus, are a good example of that.

On exposed shores Pacific blues seem to settle best, or maybe I should say stand out the most, in the higher intertidal, among acorn barnacles, Balanus glandula. On my home shores, patches of blue mussels are usually small and they last but a short time. It’s not a slam dunk these are Mytilus trossulus. Three similar mussels- they all go by blue or bay mussels- occur on our shores, and they hybridize! Blue mussels appeared in my post Standing Out in Mytilus trossulus.

They’re so ubiquitous in the rocky intertidal I tend to ignore them. That’s a real mistake. I wasn’t sure I had any good photos at all, but here are a few that I hope show some different sides of Mytilus californianus. You can find additional photos and a few more words about M. californianus at The Curves and Colors of California Mussels.

Crassadoma gigantea, rock scallop- This is another one I have not seen alive in the intertidal. Shells are not too uncommon in the drift line. Kozloff says the right valve is attached, so I imagine the ones shown here are the free left valve.

Magallana gigas, Pacific oyster- Introduced, I’ve only seen them on the protected shores of the San Juan and Gulf Islands. 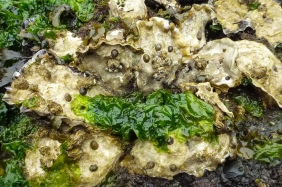 The scar on the inside of this valve is where the adductor muscle attaches | Mayne Island, BC 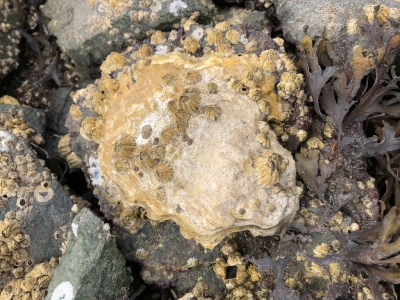 Looking down on the shallowly convex right valve | beneath, the deeply cupped left valve is attached to rock | Orcas Island, WA

Clinocardium nuttallii, heart cockle- Empty shells and shell fragments, such as the ones shown here, are common on exposed surf-swept beaches. In life, heart cockles prefer bays, eelgrass beds, an other quiet intertidal and subtidal settings. Any heart cockle shells you find on exposed beaches have drifted from other ecosystems.

Imagine both valves on a live cockle and you can see why C. nuttallii is the heart cockle. 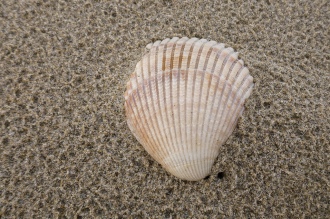 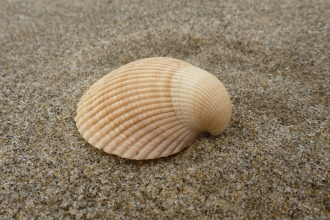 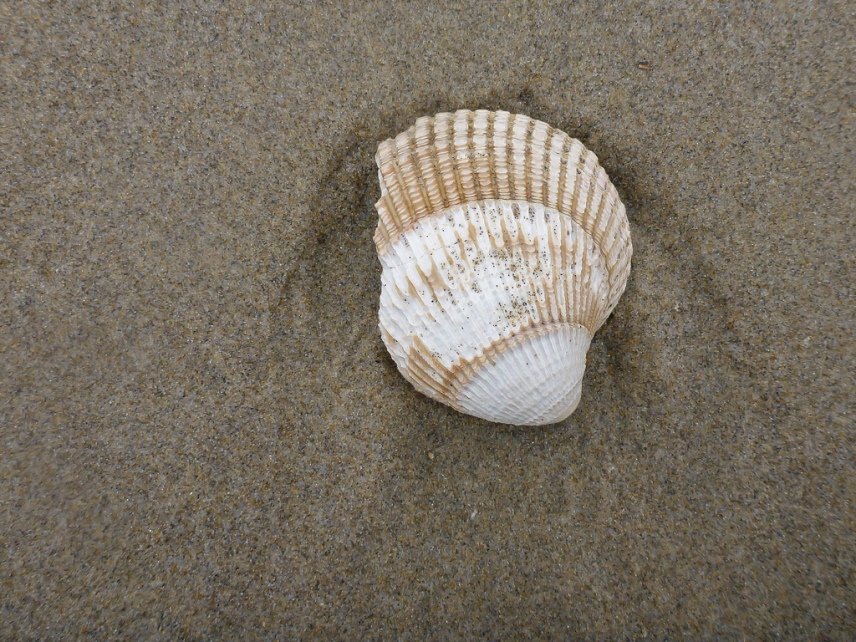 Heart cockles are fairly thick, but they do erode and fragment over time

Tresus capax, fat gaper- This is likely to be the biggest clam you’ll come across in the Pacific Northwest. On exposed beaches, bleached shells can be abundant, especially near bays with good clam beds. There is another less commonly encountered gaper in our area, Tresus nuttallii, but I’ve never crossed paths with it. Fat gapers are featured in Getting to Know Gapers, and Have I Shown You My Chondrophore Collection?

Tellins or Tellens- I have always assumed any fairly large tellin I find is Megangulus bodegensis, the Bodega tellin. There are several species of tellins occupying a variety of habitats, but Bodegas are considered bay clams in most accounts I’ve read. Kozloff says their habitat is clean sand at the mouth of bays that open onto the exposed coast.

Macomas- Any macoma I’ve found on exposed beaches has been a a drifted shell. There are lots of species. Some are bay clams and others live on exposed sandy shores with pounding surf. I haven’t tried my hand at identifying macomas, so I’ll leave it at that. The drifted shells are usually completely bleached, and not too common on my home beaches.

Nuttallia obscurata, purple varnish clam- In northern Oregon this introduced clam is a bay clam. Any shells you find on exposed beaches are drifted shells, or they’ve been carried there by humans.

Saxidomus, butter clams- Those shown here are probably S. gigantea. I’ve always thought of butter clams in northern Oregon as bay clams. They also occur in sheltered Salish Sea waters, where some of the images below were taken. Butter clams are large, like gapers, but lacking chondrophores you won’t confuse the two.

Leukoma staminea, Pacific littleneck clam- Sometimes thought of as a bay clam, littlenecks can also be found in other sheltered settings, even on the exposed coast, as the two below were. Unless you dig a little, you’ll probably only find drifted shells.

Mya arenaria, Soft-shelled clam- In northern Oregon soft-shells are bay clams. Any shells you find on exposed beaches are drifted shells, or they’ve been carried there by humans.

Penitella penita, flat-tip piddock- Shells can be abundant on beaches near sediments suitable for burrowing. I wrote a little about flat-tips in Flat-tip Piddock, Penitella penita.

Boring clams and their workings- I’m not sure what these borers are. If you know, please drop me a line. Borings, when numerous, can transform a landscape. I wrote a little about that in Boring Clams Lend an Otherworldly Appearance to a Miocene Shelf. Many a beach walker has come across a piece of shale riddled by boring clam workings. These are frequently dragged ashore in bull kelp holdfasts.