Here I feature some fishes, other than surfperches, that I’ve caught in the surf zone, or found washed up on northern Oregon beaches. The common names and organization are more or less those of Love (1996) and Miller and Lea (1972).

Blue Shark, Prionace glauca– This one washed ashore on December 8, 2019, on Samoa Beach, California. Looks to be bycatch.

Big Skate, Raja binoculata– This is the egg case. It was featured in Mermaids Purse.

Big skate egg case | This is how I found it- a dog beat me to it!

Flipped over for a more traditional view

The big skate can produce a good-sized egg case, this one longer than a pounder can 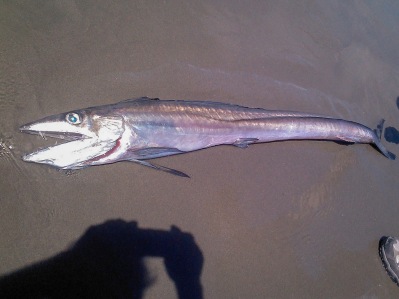 Three-spined stickleback, Gasterosteus, aculeatus– The sticklebacks I come across are ones cast up onto the beach. They live in almost every coastal stream. Why do they end up in the surf? Threespine sticklebacks appear in Stranded Sticklebacks.

Why do they end up in the surf?

Sticklebacks are no match for Oregon’s surf

Greenling (juvenile), Hexagrammos – The tow images below are the same fish, first when I encountered it cast up on the beach, then cleaned up and released into a sand-filled tide-pool. This juvenile Hexagrammos  appears in Stranded Greenling raises eternal question: To Assist or Not Assist? Cleaned up and released into a tide pool, it shows off more curves than most 75 mm fish can

Another unidentified pleuronectid- The suggestions I’ve gotten so far are starry flounder and maybe curlfin turbot. Do I hear any other suggestions? Just a few centimeters long, this is a beachcast fish.

Love, M. 1996. Probably more than you want to know about the fishes of the Pacific coast. Really Big Press, Santa Barbara, California.

2 replies to Fishes Other Than Surfperches