Below are some familiar red seaweeds I’ve been lucky enough to find and photograph on Oregon’s exposed rocky shores or washed up on the beaches. I’ve organized my examples loosely after Lamb and Hanby (2005) in the order they might be encountered from highest to lowest in the intertidal. The photos are from northern Oregon unless noted. I refer to AlgaeBase for scientific nomenclature, and if I use common names, they’re my choice. Books, field guides, and identification resources listed at the bottom of the page cover the seaweeds shown below and many more.

Pyropia, nori
There are plenty of species. I haven’t had much luck sorting them out, so below I show examples from the mid and high intertidal. Pyropia leans toward iridescence, but its degree is variable. Kozloff says they appear oiled. You’ll see that in some of the images. It’s not uncommon to find fragments washed up on the beach.

And here’s a long red blade to add to the mix. It could be Pyropia, Wildemaina, or another thin red blade. (I wish I knew—if you have an idea, give me a shout.) I’ve found it a bit lower than most of the Pyropia shown in this set, and the longest of the blades are a meter, maybe a little more in length.

Bangia
You’ll find Bangia or Bangia-like filaments on rounded high intertidal rocks, where it looks and behaves like thinning human hair. To illustrate this, I featured Bangia in A Brief Account (with Video!) of the Bangia-Human Hair Resemblance. (Note: Druehl and Clarkston (2016) explain that Bangia is in a complex of filamentous reds.)

Endocladia muricata, nail brush
Endocladia is one of the high intertidal tufts.

Gloiopeltis furcata
I didn’t notice this unassuming red ’til I took a closer look at the periwinkles that seemed to like it.

When it comes to red crusts, the guides listed on this page suggest Hildenbrandia, the crust phase of Mastocarpus, and the basal crusts of a few other reds. That’s enough to make identifying them an enjoyable challenge. Here I feature two seemingly distinct forms: a thin red crust and a thicker darker one. Both are from the low intertidal.

The three images immediately below are from April 2018. The crust is thin and hard to the touch and seems to be associated with red blades.

The three images immediately below are from May 2021. The crust seems a thicker and darker than the crust shown above. The look here is more like dark caramel or dripped hard candy. Its surface is hard, and a common theme is the presence of branched corallines.

Mazzaella parksii, horn-of-plenty
A fun one to know; it’s another one of those reds that aren’t very red. Look for it on surf-exposed high intertidal rocks. On my home beaches, March through May is a good time to find nice-looking patches.

Mastocarpus, Turkish washcloth
One of the common bladed reds in the mid to upper intertidal. I used to confidently call the bladed form shown below Mastocarpus papillatus. But Druehl and Clarkston (2016) explain the genus is a complex of variable species. To make things more interesting, Mastocarpus also has a black crust life history phase.

Cryptosiphonia woodii, bleached brunette
Cryptosiphonia woodii can be dense and turfy or show up as isolated tufts, as shown here. It is delicate when exposed and can become limp and matted. The branch tips supposedly bleach to a blondish color in the summer, accounting for the common name. I haven’t seen much of that.

This dripping red carpet is a delicious mystery. Could it be Erythrotrichia? That’s just a guess.

This is one of the filamentous reds, along with Polysiphonia below. You’ve probably seen this one as Pterosiphonia bipinnata, but things are ever-evolving so you might see it now as Savoiea robusta. In any case, its common name, black tassel, works pretty well. It can be found in more or less isolated tufts or cover quite a bit of space on mid-intertidal (and lower) vertical walls.

Callithamnion, beauty bush
The images below probably show Callithamnion pikeanum. Some references mention the branches are often covered with diatoms. I don’t know if the distinctive fuzzy look in the images below is due to a covering of diatoms or an inherent fuzziness.

Prionitis
With several species of Prionitis in our area, I’m hesitant to make a specific identification call on this one. When conditions are right it can produce dense growth and a thick somewhat treacherous mat of blades at low tide. 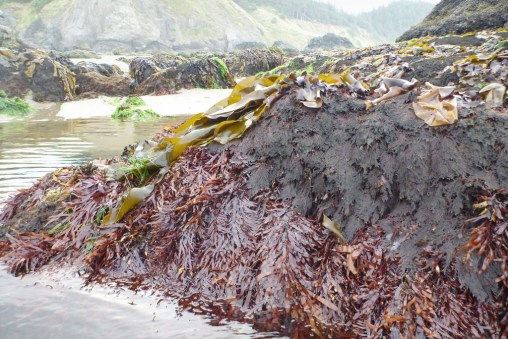 Nice layer of Prionitis in the foreground 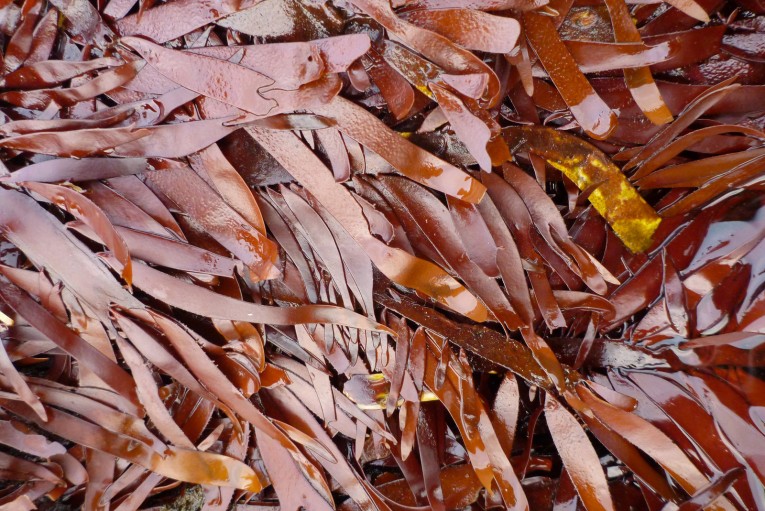 Plocamium
On beaches I visit most, I come across two forms of Plocamium. I’m pretty sure the examples immediately below are P. violaceum. It’s quite common.

The other Plocamium I sometimes encounter, and it brings me a smile whenever I do, is P. pacificum.

Melobesia, seagrass crust
Easy to find whenever the tide is low enough to expose surfgrass beds. Melobesia can also be found in drifted surfgrass among sea wrack.

Corallina officinalis var. chilensis is at home in and around tide pools.

The images below show Corallina vancouveriensis. It is prominent on low intertidal rocks and has a grayish or purplish cast compared to C. officianalis.

I’m pretty sure the images below show Calliarthron, and if they do, it’s probably C. tuberculosum.

Flat-tipped forked seaweed, Ahnfeltiopsis linearis
I’m pretty sure about the ID here, but like all of these reds, my IDs are open to interpretation. Attractive and photogenic, A. linearis is at home with periodic sand burial. Ahnfeltiopsis was featured in Seaweeds in the Sand. 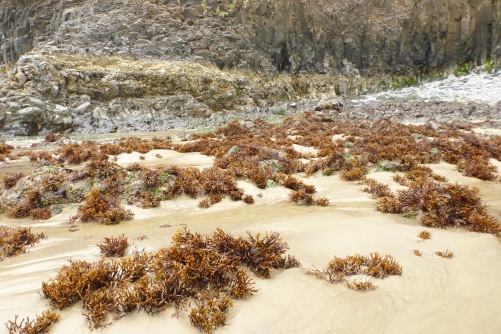 A rarely exposed grove of Ahnfeltiopsis, northern Oregon, May 8, 2016

When conditions are right Ahnfeltiopis linearis can form a hairy carpet

Callophyllis?
A beautiful puzzler, small and erect. Drifted in on the tide

Cryptopleura or Hymenena
Or maybe both! These reds washed ashore in a diverse mass of drift macroalgae. The irridescence stands out pleasingly in the drift line. My identification is tentative and general; please drop me a line if you have identification ideas.

Erythrophyllum delesserioides, red sea leaf
With its bright midribs, Erythrophyllum is a beauty. Unfortunately for me, it’s an all too uncommon treat along the intertidal shores I frequent, where even a drifted blade is notable. Where I have found Erythrophyllum, its habitat, on the sides of surge channels and other rough low places, means intimate photographs are hard to come by.

The examples below are in that Gracilaria/Gracilariopsis crowd. Seems like sand is always present or very nearby.

Odonthalia floccosa f. comosa
Not super common on my home beaches, this shaggy red sure is a beauty.

There are a few delicate fern-like Neoptilota and Ptilota on our low shores. The examples below are among them.

The three images in this set look a lot like Ptilota filicina, common in the low intertidal.

Also in the Neoptilota and Ptilota collection, here’s something a little different. The three images in the set below are of the same drifted mass. There’s a decent superficial resemblance to Ptilota hypnoides, but things are ever so much more complicated than that. 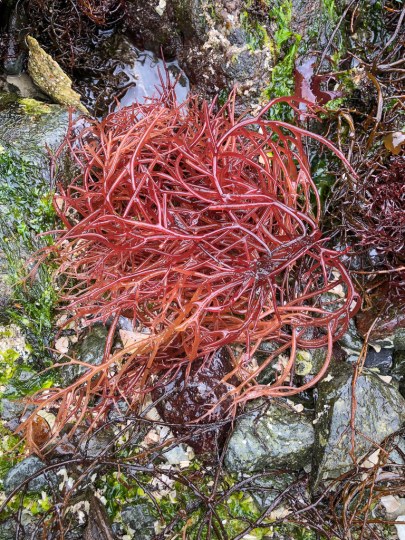 Known by some as suculent seaweed, it’s scientific name is so much more interesting |Orcas Island, Washington

Polyneura latissima
Simplicity is rare among the reds, but we’ll take it where we can get it. Any Polyneura encountered on Pacific northwest shores is P. latissima.

Something approximating Antithamnionella, red sea skein
If indeed it is Antithamnionella, you’ll see it as Irtugovia in some of the guides. It also goes by hooked or red skein. There are several filamentous reds which are hard to tell apart from photos alone. Antithamnionella a common epiphyte on bull kelp stipes, so I’m trusting that’s what at least two of these images show. They all seem to have the same look so I’ve lumped in the reds on the drifted timber too.

Give the Seaweed Sorter App a try!