First time I noticed the weathered old stump was seven and a half years ago. I didn’t think I’d see it again, but it was impressive, so I took a photo of my gear and myself leaning leaning against it. I got a chance to recreate the scene earlier this month. Notice any changes? 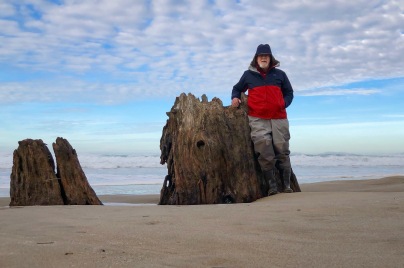 I’ve come to rely on it. It’s the only stable landmark on a stretch of more or less featureless beach. But how stable? To find out, I studied the historical Google Earth imagery. The resolution of the 2005 and 2011 imagery doesn’t pick up features as small as the stump. But, in the July 2012 imagery, the stump appears about 10 feet west of it’s current location. Images from July 2014, August 2016, and June 2017, show it hasn’t budged in over three years.

The moods of a weathering stump

As a landmark, the stump appears in Comparing King Tides and King Tide 2016