Back in mid October I spent part of a day trying to get some new shots of one of my favorite surf zone fishes, the redtail surfperch, Amphistichus rhodoterus. I didn’t get a lot of redtail participation, and as I explain below, I didn’t spend much time with those that did. My photo shoot wasn’t a big success but here are the results. 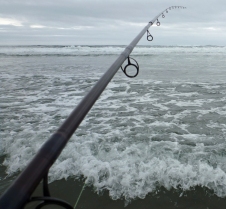 This is one of the fishiest rods I’ve ever owned

Juvenile redtail making a run for it

They don’t call them surfperch for nothing

A trusted companion in the surf

Besides the image at the top of the page, I only got two redtail shots I liked and they are shown in the gallery above. The view of the redtail from above is my favorite – that’s a free-swimming redtail’s approximation sine wave. Living in the surf, they are strong swimmers and that shot shows a lot of action in the rear third of the body.

Stressing a fish for a photograph is not something I want to do. It’s not an altruistic sentiment, I want all fish to be at their very best when I snap a photo. Everybody wins with this approach, especially the fish. I also don’t particularly want to photograph a fish with a hook in it’s mouth, so I’m practicing a quick release, then getting a photo or two of the free-swimming fish during its getaway. This is chaotic in the surf; I once lost a camera to a sneaky breaker.

I wish I had more angles on redtails to show off from my brief photo shoot. It’s not much so I’ll close with this silver surfperch that wanted in on the action. Silvers spend a lot of time in the surf zone, and they don’t mind mixing with redtails. It’s easy to see how they got their common name. The silvery skin is so reflective is’s hard to get a good photo against wet sand, even on a cloudy day.