You can count on the backshore to get short changed by us intertidal types. Perched just above the reach of tide, it’s a little bench of sand between beach and foredune. Physical forces at play on the backshore set it apart from other exposed outer coast habitats. Sandy shorelines don’t generate much spray, so there’s not a spray-dependent supralittoral community, as on rocky shores. That knocks down backshore diversity, but not as much as does its inherent instability. Even though it is rarely wetted by seawater, high tides and big winter surf can combine to create scouring waves that wipe the backshore clean.

Allonyscus perconvexus is one of the more common large arthropods of the backshore, but due to a habit of ignoring the backshore, I hadn’t seen one in the wild until just a few weeks ago. Once I decided to acquaint myself with Alloniscus I found it to be abundant in the sandy spaces between pioneering backshore plants like dunegrass, Elymus mollis, and sea rocket, Cakile edentula. I think of Alloniscus as a backshore specialist, but you can also find it seaward, in the wrack line, and landward, up on the foredune.

If the spring tides of November and December combine with strong storm surge, the backshore is going to take a pounding and the plants in the photos above will wash away before the New Year. It’s a cycle of disturbance that has to be reckoned with by all backshore plants and animals. Landward, the foredune is a refuge.

Alloniscus ventures out only at night, when they forage on beach wrack. They spend the day in in burrows they construct themselves, sometimes under surface objects. The Alloniscus shown above is scurrying for cover after I excavated its burrow. Unless you do some digging, all you’ll see of Alloniscus during daylight are their trails, tracks, and shows. I include the gallery below to illustrate a variety of looks. 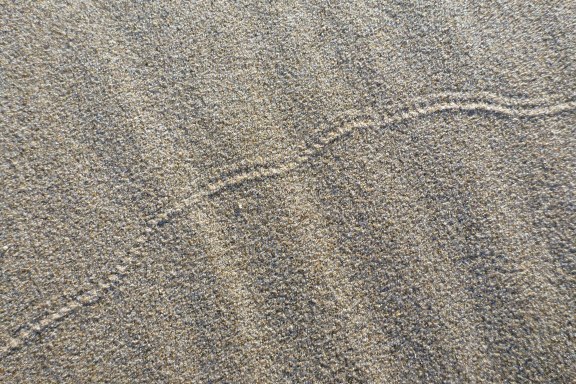 Alloniscus is a wide-body – with seven pairs of short legs, they leave distinctive tracks

Burrowing along under the suface, Aloniscus leaves a mounded trail

Some Alloniscus trails can be followed for meters 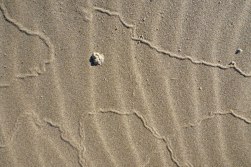 Crazy pattern of trails; the mound near the center is a burrow show

One of the tricks I have used to find Alloniscus during the day is to find an occupied burrow. Just look for a small fluffy mound of drying sand.

If you locate a show, there should be a quiescent Alloniscus beneath it. The photo below shows what I found below this mound.

After I excavated this one, it made me wait a while before it did anything. I remember noticing how white the ventral surface and legs were. After a wait that tested my patience, it straightened out, rolled over, and marched off faster than I expected.

This is the first Alloniscus I ever photographed – September 6, 2015. I found it in a little hole in the sand under a piece of driftwood. It was raining and I had to wait a long time for it to express itself, even a little. The few I have spent time with seem shy. While I was waiting, I had plenty of time to notice and enjoy the ornate markings on the carapace.