Below are images of sandy beaches more or less occupied by the surfperches, Amphistichus rhodoterus and Hyperproson ellipticum, year around.  All of the photos were taken at low tide and the views are to the north.  Do you notice any differences?  Do you think a surfperch could? 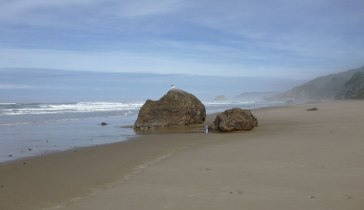 Here on theoutershores, we’re always thinking about how similar species, like small silvery surfperches, partition their world and find a way to coexist in simple and seemingly featureless sandy landscapes.  In And the King of the Surf is… I showed that redtail surfperch, A. rhodoterus, and silver surfperch, H. ellipticum, are common surf zone inhabitants in my home waters.  Surfperch coexistence isn’t unique to my part of the world. Wherever there are exposed sandy beaches, anywhere from Vancouver Island, British Columbia, Canada to north-central Baja California, Mexico, you will almost always find two or three surfperches making a living in the surf zone.  How do they do that?  In Sampling Surfperch on the Incoming Tide I started an exploration of surfperch abundance and the tidal cycle, and the results got me thinking that some partitioning may occur when species respond differently to the tidal cycle.  Here, I tackle another aspect of environment; do redtails and silvers partition the surf zone by preferring different beaches?

Over the past few years I’ve sampled surfperch on the extensive sandy beaches of northern Oregon.  These beaches are separated from each other by one to many rocky headlands and intervening beaches, and by distances from less than a mile to over 50 miles. The basic sampling method is angling.  I used one method for a while and I call it my pilot method. If you want to know more about my pilot method you can check out Choices, Choices…Everywhere.  I recently improved on that method with some simple refinements that aren’t really important here; the two methods are similar.

This is a look at the overall catch from the pilot and the refined sampling methods.  There are two things to notice.  First, both methods pick up more redtails than silvers.  I don’t know if either method does a good job of assessing relative abundance; usually we think smaller fish, silvers in this case, are going to be more abundant.  Second, the proportion of silvers in the sample nearly doubles, increasing from 22% of the catch with the pilot method to 39% of the catch, with the refined method.  The simplest explanation is that the refinements improved the chances of connecting with silvers.  The two methods are similar from this angler’s point of view, but apparently not from the surfperches’ point of view, so I’m hesitant to combine the results.  Both provide indices of abundance, and, applied in a standard fashion on different beaches, they should reveal preferences if any exist.

I’ll start by comparing the redtail and silver catch at beaches where the sample is large, exceeding 50 fish. Big samples should more accurately characterize what’s going on than small samples. The 50 fish rule is kind of strict and a result is that my comparisons are limited to two beaches under the pilot method and two beaches under the refined method.  In the top panel you can see that the proportion of silvers varies quite a bit between the two sites, .09 at location 1 and .66 at location 2.  You don’t need a statistical test to tell these beaches are different.

Under the refined protocol (bottom panel), the proportion of silvers is similar at the two sites, .29 at location 1 and .32 at location 2.  It’s pretty clear the results from these beaches are nearly identical.  The larger overall number of fish at location 1 is an effect of sampling effort (same for the upper panel). So, from an abundance perspective, for the two most abundant surfperches, it looks like some beaches are are quite different and some are similar. Let’s examine a larger set of results.

The tables above show the catch at locations I sampled long enough to catch at least a few fish.  Locations 1, 2 and 4 will be familiar from the discussion above.  If you want to go the statistical route, assuming this stuff meets all or most of the assumptions, we can bust out the chi-squate statistic. Remember this old friend?

In the pilot (top table), as I foreshadowed earlier, silvers are underrepresented at location 1 and overrepresented at location 4.  They are also overrepresented in the location 2 sample compared to what you would expect if there were no differences between beaches. Here, X2 = 33.00, df = 4, p < .0001. There are also between-beach differences with the refined sampling method (bottom table),  X2 = 20.33, df = 4, p < .0001. If you check out locations 3 and 4 you can see that silvers are substantially overrepresented compared to the random expectation. So, under two protocols, it looks like heterogeneity is the name of the game when it comes to surfperches and sandy beaches.

This result is important because it is part of the explanation for how, over a range spanning over 1,600 miles of coastline, two or three species of surfperch can coexist wherever there are exposed sandy beaches. This insight about beach heterogeneity is pretty cool and, I confess, a little surprising. I guess I fell into the trap of thinking about the sandy beaches as featureless and rather homogeneous. I wonder what surfperches see that I don’t?