Last May I posted this photo and caption on Wrack Line 2013.  I hoped the caption might lead to the identification of this interestingly colored ribbed shell.  No such luck however, so yesterday I posed the challenge again on the TOS Facebook page along with the additional views shown below. 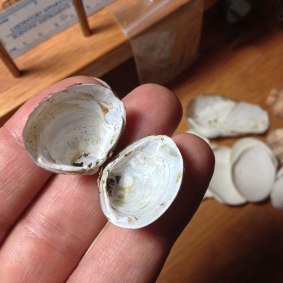 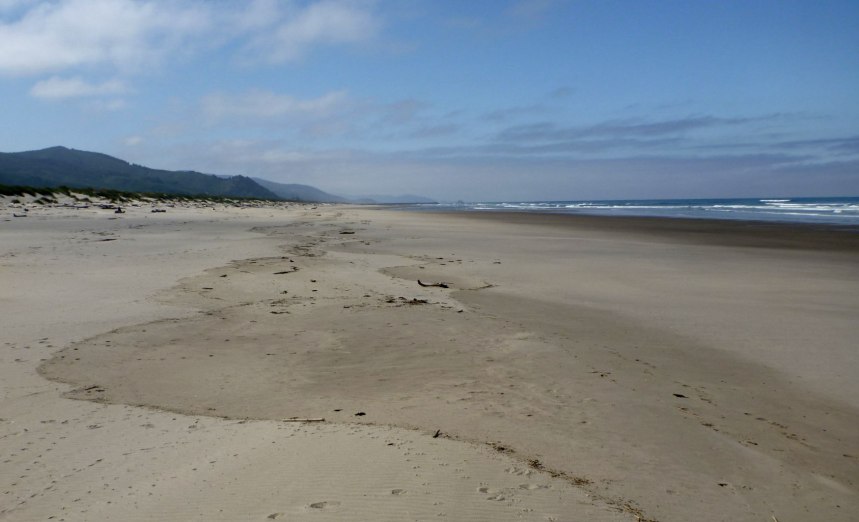 Here’s the beach where I found the Corbicula shell.  So what gives?  Corbicula is a freshwater clam with a vast worldwide range.  The view above looks south to the mouth of a river that is probably inhabited by Corbicula.  The most likely explanation for the occurrence of C. fluminea on ocean beaches is that they get mobilized by dredging or other activities upstream in their home rivers and wash downstream into the ocean, where some eventually wash up on the beach.  In small rivers that’s not always a long trip because Asian clams range as low as the tidal freshwater reaches.

If you want to learn more about Corbicula, the Wikipedia page is pretty good, and here’s what the USGS’s Nonidigenous Aquatic Species experts have to say.

Acknowledgements. – Thanks to Paul Heimowitz and Robin Draheim for helping me confirm the identify of the Corbicula shell featured in this post and the likely mechanism for their occasional appearance on coastal beaches.  I also want to acknowledge all the participants in the TOS Facebook quiz, especially Ken Oda who correctly identified this shell as Corbicula.

2 replies to Answering the Clam Challenge: Which Shells for Which Beaches?