This is eelgrass, Zostera marina.  A few days ago it was abundant in the wrack line, on the beach and in the surf.  Most of the eelgrass debris was composed of broken stems, but there were a few whole plants in the mix.  Eelgrass lives in estuaries and other sheltered places, not on sandy surf-swept beaches, so why was it here?  Was it carried into the surf zone by higher than normal flows in local rivers?  Below I show the gauge height from a typical TOS river for a few days leading up to September 21, the day I encountered a large accumulation of Zostera on the beach. 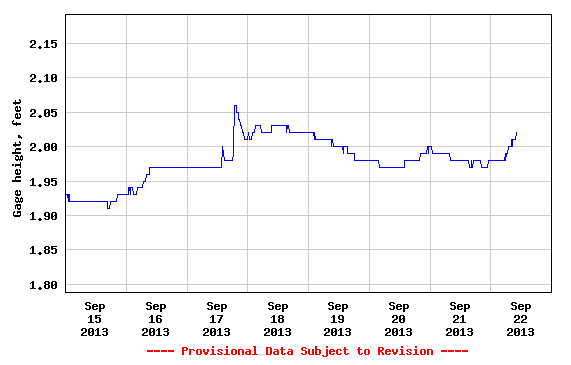 There is a slight spike in river levels on the evening of September 17.  I was on the beach on the morning of September 21, so that’s enough time for any mobilized eelgrass to wash out of the estuary and into the surf zone.  But the river level, where it was measured, just above tidewater, only rose a couple inches.  Could that slight increase dislodge or break up a large a large quantity of eelgrass?  I don’t think so but maybe the modest spike in river level, in combination with something else, like a high tide event, could explain the eelgrass on the beach.  In the chart below I show the tides for the month of September, 2013.

Beginning around September 17, we see some pretty good afternoon high tides, peaking with the afternoon high tide on Friday, September 20 which reached 9.0′ above lower mean low water.  That’s the highest high tide in a month.  The other thing to notice is a series of low low tides (shown in blue) during this period.  That makes for a big swing and thus, strong currents in the estuary.  That could do it, or at least partially explain the big slug of Zostera on the beach.  There is another factor worth looking into – swell.  Large waves can penetrate the estuary for a distance and stir things up a bit.  Can the influence of swell move far enough into the estuary to influence conditions in the eelgrass beds?  I’m not sure but here is a look at swell conditions anyway.  Below I show the marine forecasts for the Thursday morning, September 19 and Friday morning, September 20.

The Thursday swell forecast is typical of summer conditions, while the wind forecast, SE veering to S, is indicative of an approaching weather system.  The Friday forecast calls for change in swell direction and a big increase in swell size.  A 3x increase in swell over a 24-hour period is probably enough to stir things up in the lower estuary, especially after a calm summer of low swells.  Maybe the big swell combined with high tides and big tidal swing is enough to mobilize eelgrass and transport it into the surf zone where it accumulates as wrack on the high tides.  There could be other explanations, so I’m not certain I’ve solved the mystery but this seems reasonable.

I took a look at my field notes to see if they contained any other clues.  My notes for Sept 20, 2009 say “HT 9.2′, 2’ww and 7′ west swell…Strong N wind, rough seas, lot’s of grass.”  That big afternoon tide was followed in the evening by a low tide of -0.8′ so, big swing.  On October 26, 2011, my notes say “HT 9.9′, next low -1.8′ ww 3′; w swell 6’…a bit of troubling eelgrass in the surf at HT…”  What these eelgrass events have in common with my recent observation is they occurred in the fall and were associated with high high tides and big tidal swings.  For now, my working model is that all else being equal, the first high tides and big swings of fall are associated with mobilization of eelgrass in the estuaries and its accumulation, within a day or two, on the beaches.

Eelgrass lives in estuaries and other sheltered places.  If you love Zostera but don’t have a go-to eelgrass bed, finding one would make for a great field trip.  For more immediate gratification check out Seagrasses and Oddballs, and Eclectic Echo’s Flickr, Inside the Eelgrass beds which has some eelgrass images worth seeing, including “An otter’s eye view of the eelgrass beds in Elkhorn Slough.”

The big swell on September 20, got a lot of stuff up in the surf and on the beach.  If you want to see some other things I found in the fresh wrack on the day the eelgrass came in, go to Wrack Line 2013 and scroll down to September 21.

Sea Wrack Detail
Island in the sand
Standing out on a red carpet
Young thatched barnacles, Semibalanus cariosus, stud the shells of California mussels, Mytilus californianus.
Laying out on the low
Something about the seam
Blending in
The head-down move
Between starfish and the sky
A taste for the tide